In normal times, during a Harmony Brigade, a group of Barbershoppers from far and wide get together to sing. However, it’s not as straightforward as just singing songs! Before the events, the participants are usually given three or four months to learn twelve songs in their chosen voice-part to performance standard.

There are two main aspects of a Harmony Brigade. The first is to sing one of the twelve songs in quartet with every other participant. If you sing with all the people in the other three voice-parts, marking them off on your “dance card” as you do so, you win a “Tramp” award. If you can learn a song in a second voice-part, you can also sing in quartet with those singing your own voice-part and achieve “Supertramp” status! 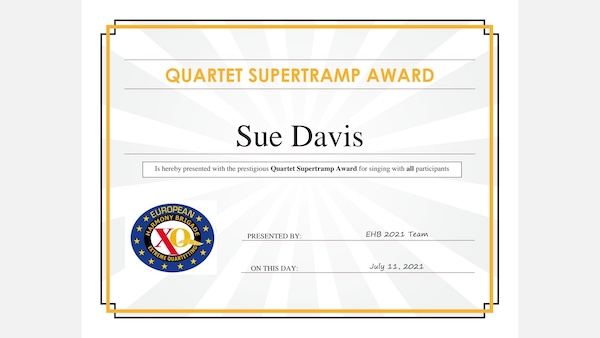 The second (and almost as important as the first) part is the competition. There is a draw where participants are randomly assigned three other quartet members and a song from the twelve. Everyone is given around ten minutes to come up with a quartet name and rehearse the song, probably for the first time in that particular quartet configuration. This is called Extreme Quartetting!! Following the short rehearsal, each extreme quartet then performs in front of everyone else and a judging panel. Fun but nerve-wracking!!

To qualify for participation, singers have to demonstrate their competence in each of three songs randomly chosen from the twelve. You can have five attempts, but if you don’t eventually pass, you can’t enter the draw for the competition or perform in the show.

The winning quartet gets to sing on the evening show, but everyone has a chance to perform in the Brigade Chorus along with guest acts, some of which will have been auditioned from members of the Brigade.

During the coronavirus pandemic, Harmony Brigades have been very different, being forced online like so many other activities. Different formats have been used in the recent Brigades, but the rehearsals have all been the same, singing together in (almost) real time using Jamulus. This has been one of the joys of the brigades.

On the weekend of the 9th July, Noey and Sue attended the European Virtual Harmony Brigade, which would have been in Germany. Around 50 singers from America and Europe learnt six songs and the whole event actually took place live on Jamulus and Zoom over a weekend. The evening show was broadcast live on YouTube by WorldJam productions, and the weekend was huge fun. It was as near to the real Brigade experience as possible without leaving your home. “Like a real Brigade, but without the hugs!”

The following weekend it was the Mixed Virtual Harmony Brigade of New England, which would have been held in the USA, and also included singers from all over America and Europe.

We again learnt six songs in our chosen voice part, practising them during Jamulus run-throughs in the couple of months leading up to the event, then sent in recordings made at home of ourselves singing each of the songs.

A week before the event, we were randomly assigned our quartets and a song picked from the six. Our previously recorded audio tracks were then mixed into competition quartet entries and the members of each quartet got together to agree a name and create a video for entry into the Harmony Brigade competition.

During the competition, the resulting videos were shown to the other Brigaders who judged each other’s performances. The members of Sue’s quartet - "Dear John" - were thrilled to be judged in bronze medal position, 3rd out of 16 quartets, singing “Angel Eyes” by Earl K Brent, music by Matt Dennis, arr. Hal Maples. 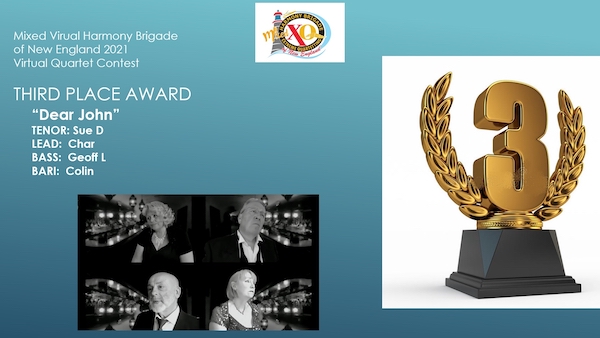 Here is a link to the video of Dear John’s third placed competition entry:
https://youtu.be/GDlxIgcddJ4

The evening show featured various acts including Black Sheep Harmony’s in-house quartet, The SongSmiths, singing Jim Croce’s “Time in a Bottle” arranged by Joey Minshall. The audio track was mixed by our very own Pete Nugent and the video created by Noey McElwee.

Here is a link to the SongSmiths’ video: https://youtu.be/qeIn-GMKMgs

Earlier in the year, in February, Noey and Sue also took part in the UK Virtual Harmony Brigade, normally held in Nottingham. This Brigade was in the same format as the MVHBNE, using pre-recorded voice-parts mixed to make virtual quartets.

This time it was Noey’s quartet, “The Bristol Variant“, that was voted into second place by the other participants. 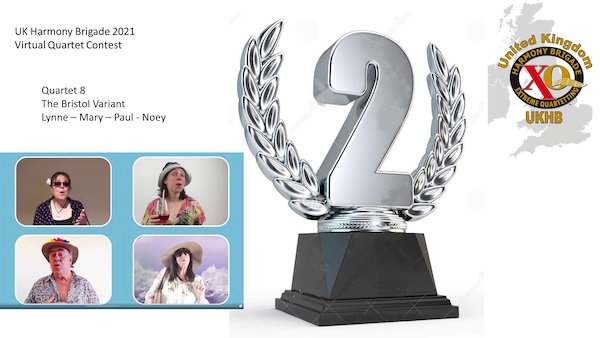 They were singing “Fly Me to the Moon” by Bart Howard, arr. Roger Payne:
https://www.youtube.com/watch?v=DHE0looAVi8

All three events were great fun, but hopefully, the next one will be the real thing!